Now with UNESCO World Heritage status, the walled Rhodes Old Town is full of more sights than can possibly be sampled in one day trip.

Many Pefkos visitors go there each year and explore something different. 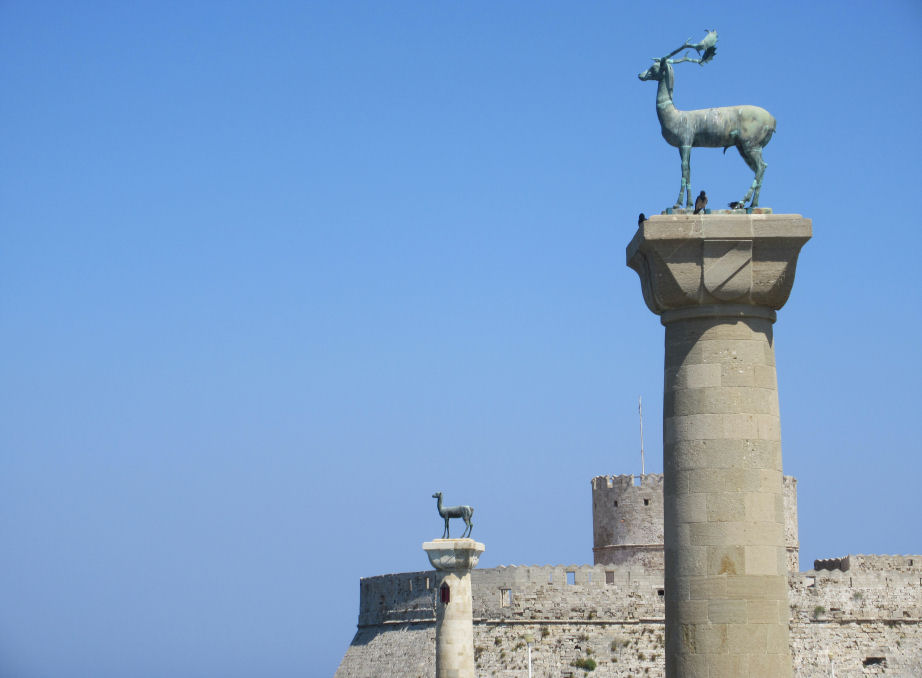 One of the best restaurants in Pefkos is named after the two Fallow Feer (latin name Dama Dama) statues which guard the entrance to the harbour. In ancient times the collosus of Rhodes was a huge bronze staue over 100 feet tall, and allegedly straddled the harbour mouth. 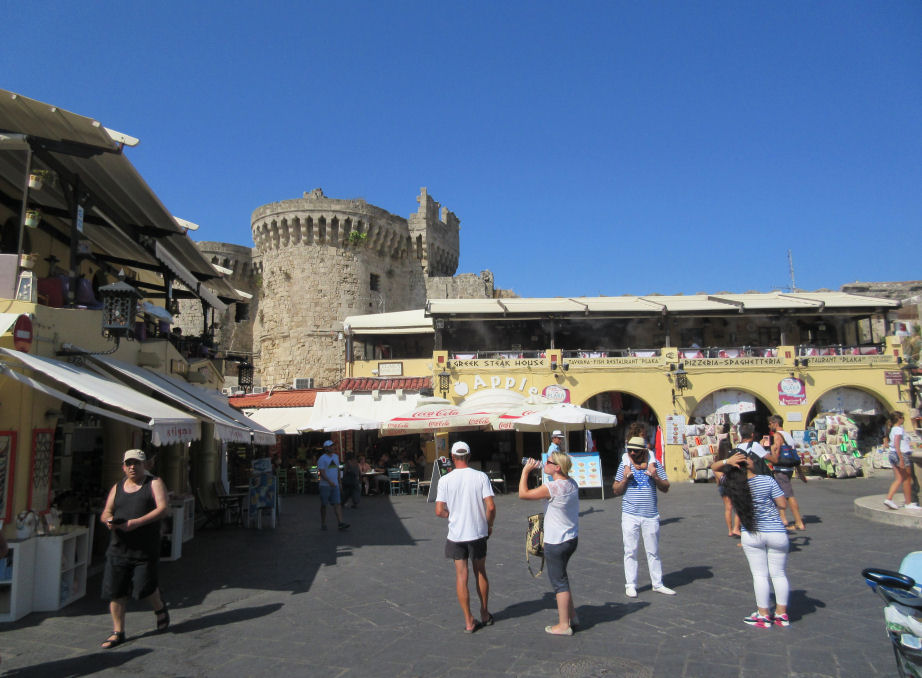 The charm of the old town is the mix of people, shops and restaurants all surrounded by very old buildings, and towering fortifications dating from the time of the Knights. 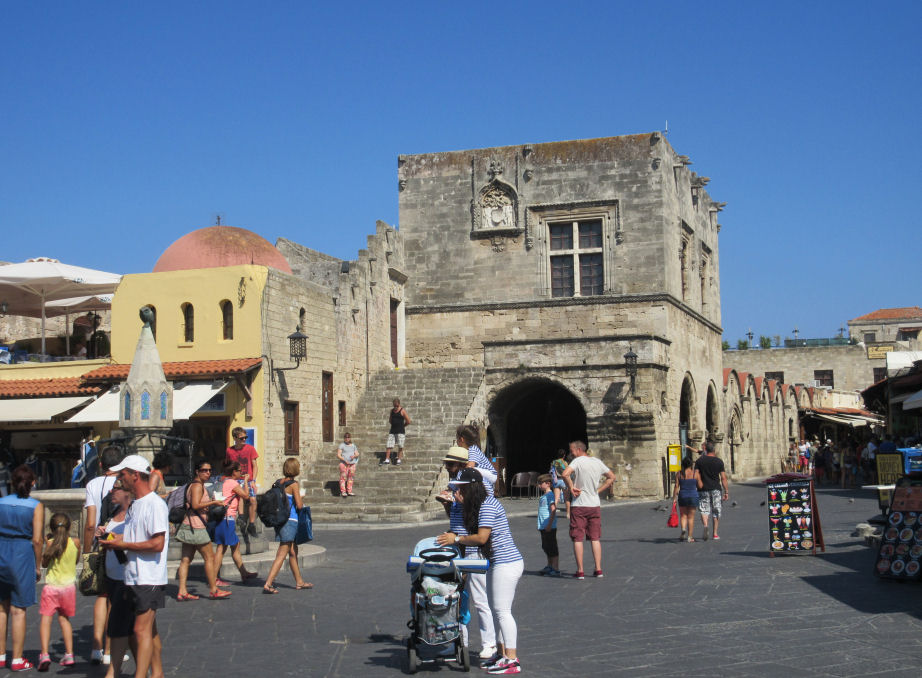 There are numerous staircases leading up to the City Walls. These are open only for specific times, but for a low cost you can book a fascinating guides tour of the walls. 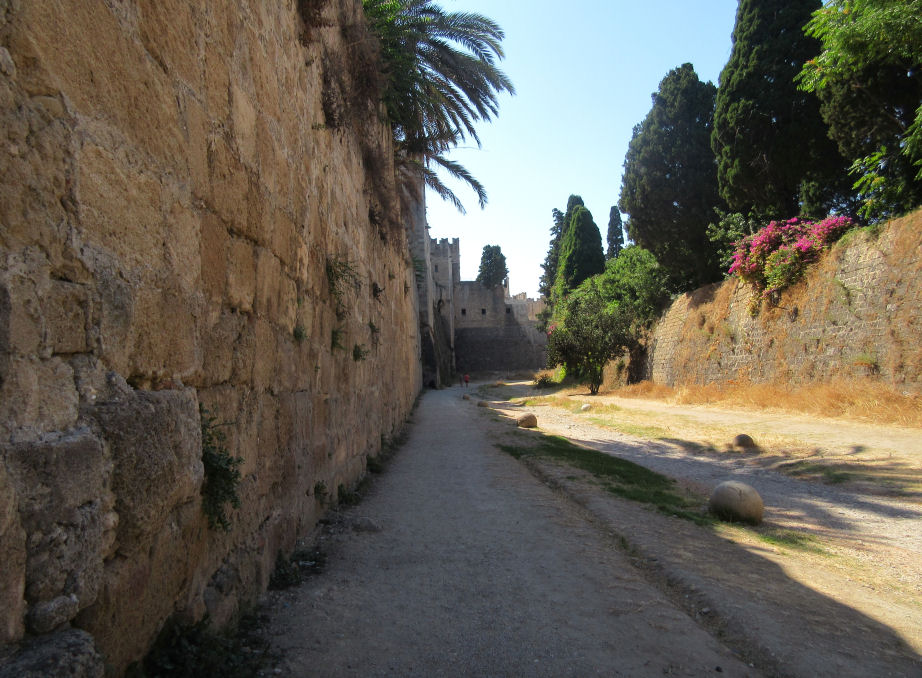 The Moats of Rhodes Old Town

The huge City Walls were protected by wide moats to prevent easy attack. These moats are now completely dry and have paths throughout. 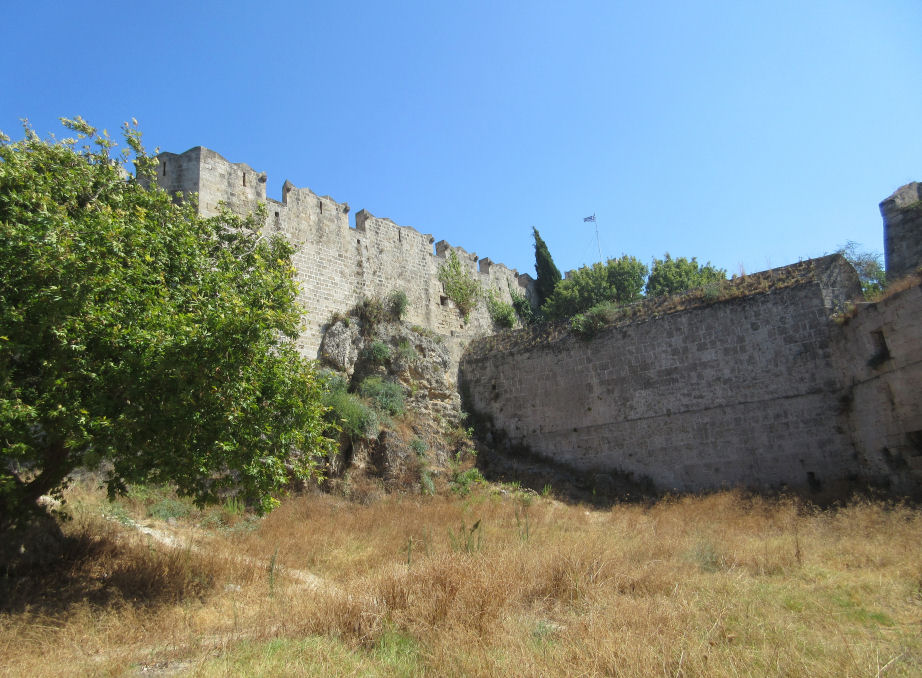 The Walls of Rhodes Old Town are fortified with numerous castelations and archery slits. There are 4 kilometres of fortified walls. 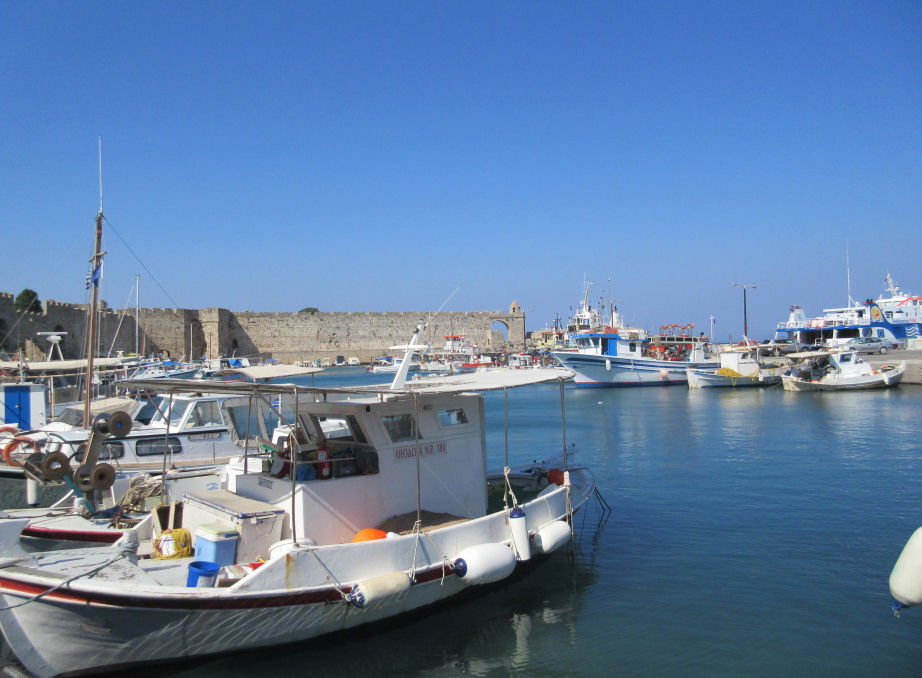 There are several marinas here, and the customers range from small simple craft owners to multi million pounds luxury yaghts belonging to the rich and famous. Rhodes town is also a popular stop off for Meditereanean Cruises. 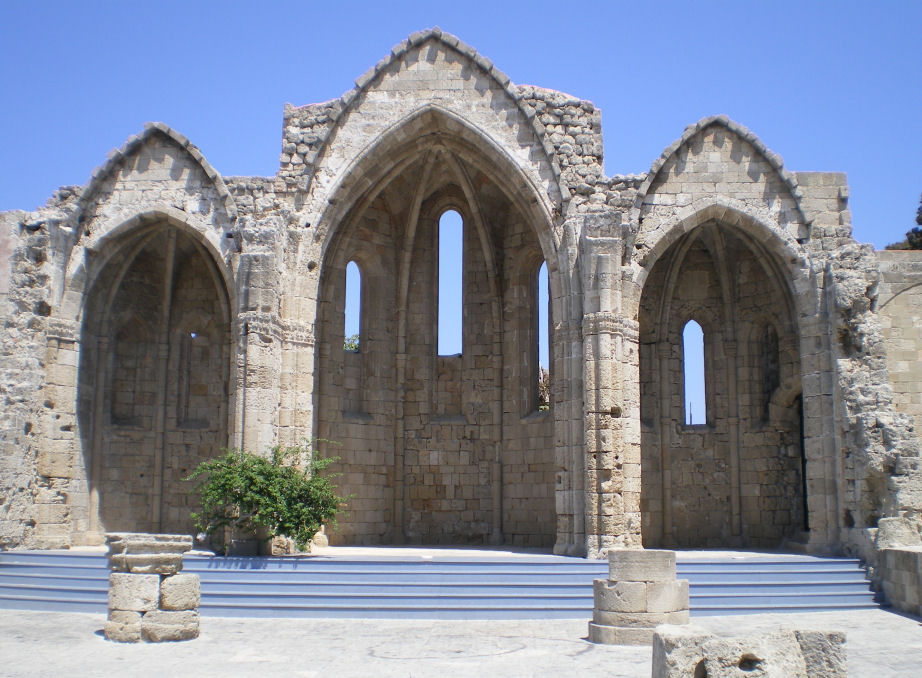 Ruins of the Hospice of St. Catherine

The ruins of the 'Our Lady of the City' church and the gothic arches of the Hospice of St. Catherine. The church was built in 1390AD, but destroyed by seige in 1480. 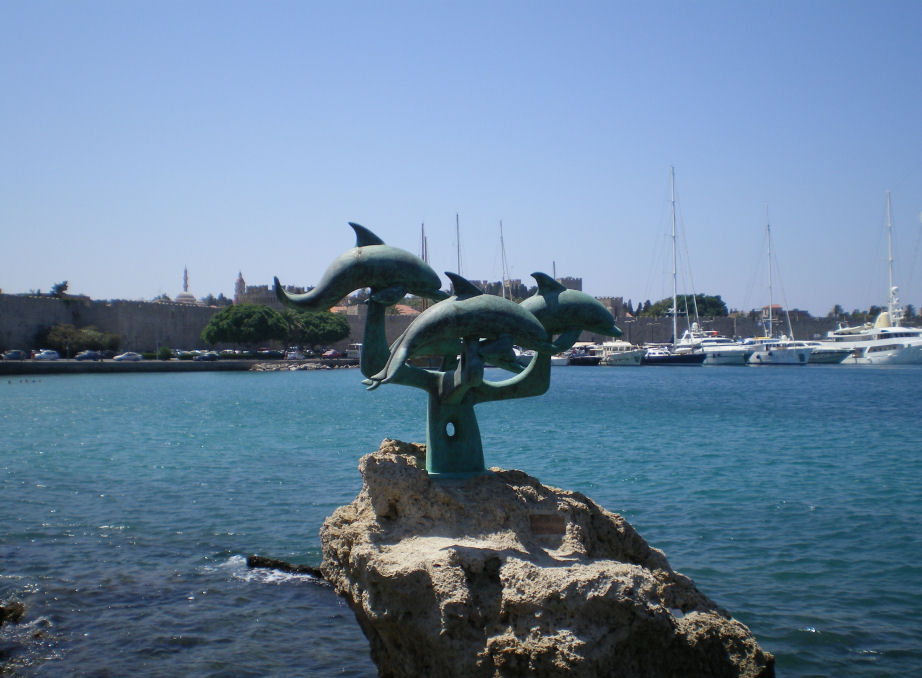 There's a curious statue of four dolphins on the waterfront ona rocky outcrop. If you know more details about it please contact us. 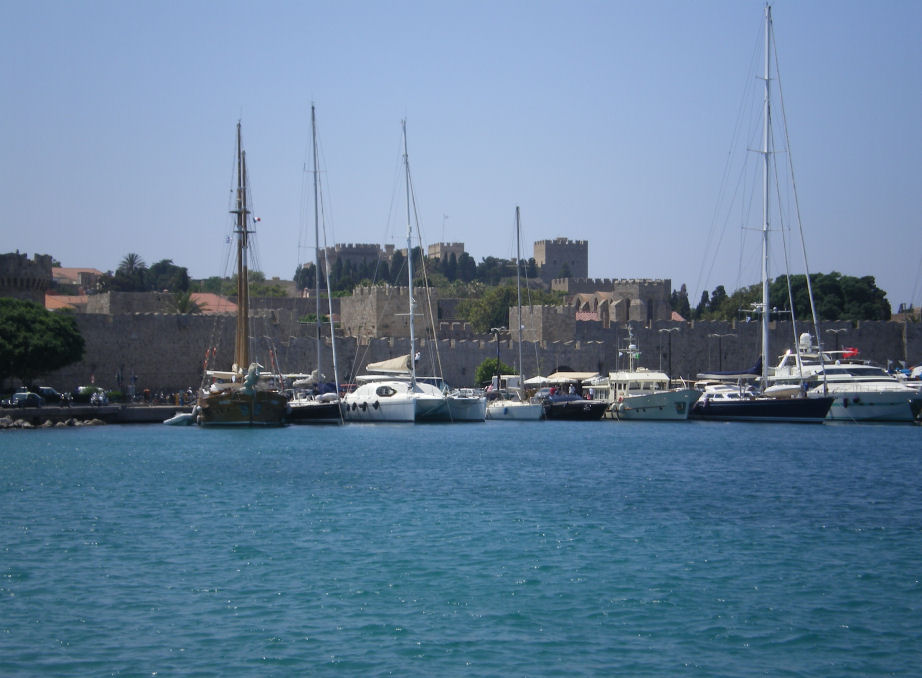 The Grand Master of Knights is a Medieval Castle built within the city wals of Rhodes Old Town. Originally built in the 7th Century AD, it was converted to the Palace of the Grand Master in 1309 by the Knights Hospitaller. 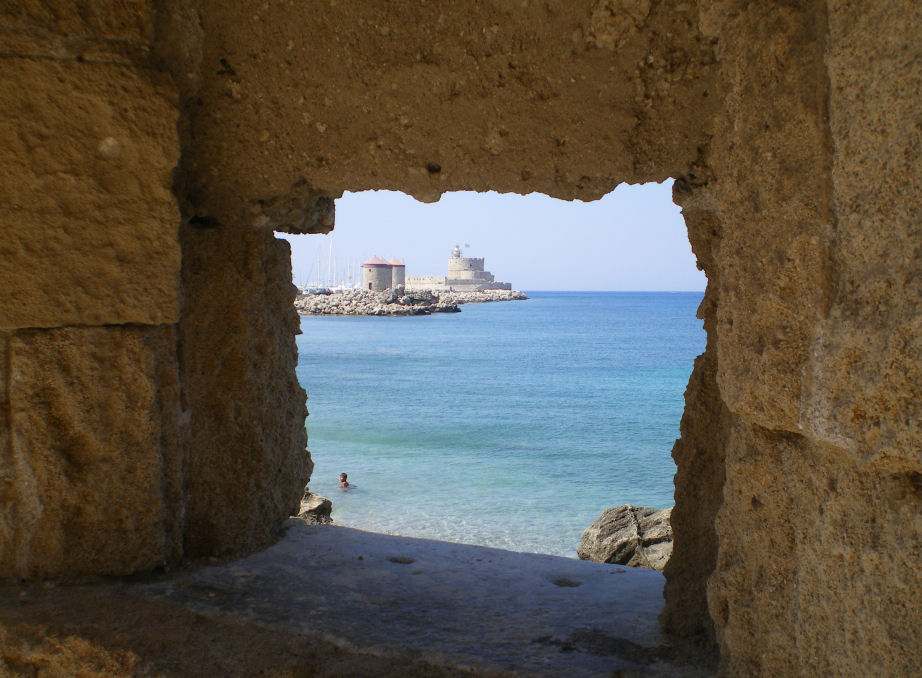 In this picture their seen through a window portal in the fortified city walls. The medieval windmills once produced floor from grain ships unloading here.